Here you can see the series of hand-painted beer mugs featuring the seven divisional shields of the premier Panzer divisions of the Waffen-SS – as seen in the Daily Mail! With the divisional symbols piped in black paint and then baked, these stunning 0.8kg mugs make the perfect gift for any Waffen-SS or Panzer division enthusiast.

Every item is painted and baked to order, not in some remote part of the world but here in the UK by my partner (who will be more than happy to look at any custom design too). Recent examples have included the division symbols for Grossdeutschland and Panzer-Lehr, as well as U-Boat turret insignia.

These exclusive beer mugs are available to customers in the United Kingdom at a cost of £13.95 Sterling including postage and packaging. For orders from Europe and further afield, postal costs vary considerably based on the size and weight of the parcel, so if you fill in the form below we will be happy to work everything out and send you a quote. The glasses are pretty heavy, and a full set of seven usually weighs around eight kilogrammes.

The 1st Panzer Division Leibstandarte SS Adolf Hitler was the premier Waffen-SS division, initially formed in 1934 from what was Hitler’s bodyguard cadre, and was seen by many as the elite division within the Waffen-SS. It was the first of the four initial SS-Standarten, the other three being Germania, Deutschland and Der Führer – which formed the SS-Verfügungstruppe (SS-VT), later the 2nd SS Division Das Reich. In the ranks of the LSSAH could be found some of the most well-known names in the Waffen-SS including Michael Wittmann and other notables such as its commander Josef “Sepp” Dietrich, Joachim “Jochen” Peiper and Kurt “Panzermeyer” Meyer.

The divisional symbol as depicted on the mug is a skeleton key known as a Dietrich – a play on the name of the LSSAH’s popular commander. 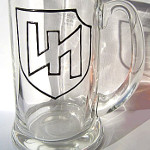 The 2nd SS Panzer Division Das Reich was the most successful Waffen-SS division in terms of Knight’s Crosses awarded, and was formed from the onetime SS-Verfügungstruppe (SS-VT) – which comprised of three of the initial SS-Standarten (the other being the Leibstandarte). The formation was given the designation Reich in 1940, and became Das Reich in 1942. Its most famous commander was Paul “Papa” Hausser, and the division’s Panzertruppen counted among their number Ernst Barkmann, probably the most famous Panther commander of the war.

The divisional symbol as depicted on the mug is an old Germanic symbol known as the Wolfsangel, or wolf’s hook – which was originally also a mason’s symbol that still appears on many coats of arms.

The 3rd SS Panzer Division Totenkopf (“Death’s Head”) was initially seen as the “black sheep” among the elite Waffen-SS Panzer Divisions on account of its initial formation in 1939 around a core of onetime concentration camp guards (SS-Totenkopfverbände, SS-TV), but by the time of its being designated as a fully-fledged armoured division it had become a fighting force in its own right – albeit a fanatical one that suffered heavy losses, particularly in Russia. The ranks of what became the 3rd Panzer Division produced a number of Knight’s Cross winners including the first enlisted man to win the award, SS-Sturmmann Fritz Christen.

The divisional symbol as depicted on the mug is the death’s head or Totenkopf, which as well being one of the symbols of the SS had a history as the badge of elite German military formations dating back to the time of Frederick the Great.

The 5th SS Panzergrenadier Division Wiking (“Viking”) was the foremost of the many foreign volunteer formations raised within the ranks of the Waffen-SS. While the majority of the officer corps were taken from the SS-VT, the rank and file were mainly from Denmark, the Netherlands and Norway. Originally named the Nordische Division, it absorbed the SS-VT Standarte Germania and the foreign volunteer formations Nordland and Westland, becoming Wiking in early 1941. The division produced some of the finest fighting formations on the axis side during the war, and was led by some of the finest officers in the ranks of the Waffen-SS, including Felix Steiner and Herbert-Otto Gille.

The divisional symbol as depicted on the glass is the curved-arm sunwheel, often seen in runic legend.

The 9th SS Panzergrenadier Division Hohenstaufen was one of the later SS formations, formed in 1943 along with its sister division, the 10th SS Panzergrenadier Division Frundsberg – constituting the II SS Panzer Corps. Named after the Hohenstaufen dynasty, Hohenstaufen created a reputation for itself during the fighting in Normandy and after that during the British campaign centred on the Dutch town of Arnhem – the ill-fated Operation Market Garden, made famous by the book and film A Bridge Too Far. The division’s most famous commander was arguably its first – SS-Obergruppenführer Willi Bittrich, who commanded the division at Arnhem.

The divisional symbol as depicted on the mug is a stylised “H” (for “Hohenstaufen”) superimposed by a vertical sword.

The 10th SS Panzergrenadier Division Frundsberg was formed in 1943 along with its sister division, the 9th SS Panzergrenadier Division Hohenstaufen. Named after the 16th Century German Landsknecht commander Georg von Frundsberg, Frundsberg made its mark first in Normandy, along with Hohenstaufen with which it made up the II SS Panzer Corps. In late 1944 Frundsberg was based around the Dutch town of Nijmegen during the ill-fated Operation Market Garden; it did much to stem the allied advance. Perhaps Frundsberg’s most famous personality was revealed very recently – the left-wing author Günter Grass, who was conscripted as a seventeen year old in late 1944.

The divisional symbol as depicted on the mug is a stylised “F” (for “Frundsberg”) superimposed on a north-east facing oakleaf.

Known as the “Baby Division”, the 12th SS Panzer Division Hitlerjugend was formed in late 1943 as part of a plan to develop a military formation made up of all HJ members born in 1926. A mix of battle-hardened Leibstandarte veterans and ideologically-primed teenagers, the division soon developed a reputation for its bravery in the field – but also for an almost blind fanaticism that didn’t exist among the older generations of Waffen-SS personnel. Hitlerjugend forged its fearsome reputation in Normandy, and the young men within its ranks fought bravely until the final days of the war. Its most famous commander was probably the most dashing senior officer in the Waffen-SS – Kurt “Panzermeyer” Meyer.

In addition to the seven Waffen-SS Panzer divisions, requests can also be made for other designs from the other Waffen-SS divisions through to élite Army formations such as Panzer-Lehr [

As a result of previous issues a few years ago, we had to remove the facility for instant online ordering. If you would like to place an order just fill in the short form below, which will cover the basics – design(s), numbers required and where the package will be sent. We will then get back to you.

Chunky, sturdy, one pint beer mugs featuring the shields of all seven of the premier Waffen-SS Panzer divisions. As featured (somewhat inadvertently!) in the Daily Mail.

Perfect for that chilled Pilsner to accompany the Wursts from the barbecue!

The Story of Michael Wittmann